The NEXTFLEX® Small RNA-Seq Kit v3 uses patented and patent-pending technology to provide a reduced-bias small RNA library preparation solution for Illumina® sequencing platforms with gel-free or low-input options. Our approach to reducing ligation-associated bias involves the use of adapters with randomized bases at the ligation junctions, resulting in greatly decreased bias in comparison to standard protocols. This reduction in bias results in data that more accurately represents abundances of small RNAs in the starting material. In addition, reduction of bias allows more miRNAs to be detected with fewer total reads, increasing efficiency and reducing cost for small RNA sequencing.

The NEXTFLEX® small RNA-seq v3 kit with UDIs uses the same popular chemistry of the NEXTFLEX small RNA-seq kit v3 and improved accuracy with the integration of Unique Dual Indexes (UDIs) for Illumina® sequencing on the MiSeq®, HiSeq® 2000/2500, and NovaSeq® platforms. The addition of UDI barcodes for small RNA sequencing allows confident multiplexing of up to 192 samples, all while mitigating the risk of index hopping and spread of signal that can occur on a patterned flow cell. The purity of each index sequence is validated by sequencing for high confidence in the resulting sequencing data quality, 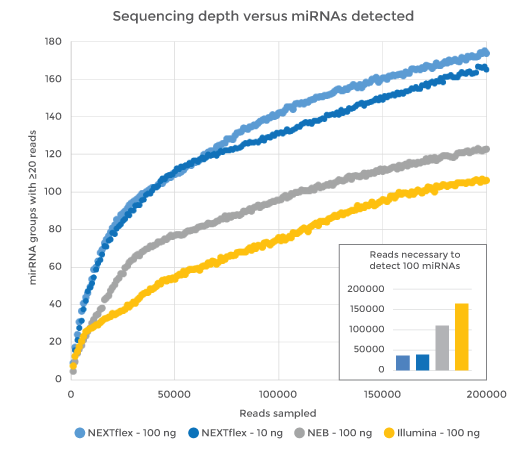 The adapter-dimer reduction technology incorporated into this kit also allows low input library preparation. Library preparation with as little as 1 ng of total RNA is possible as additional PCR cycles can be performed without adapter-dimer products dominating the final library. Fig. 2 illustrated that expression values are reproducible across different sample inputs. 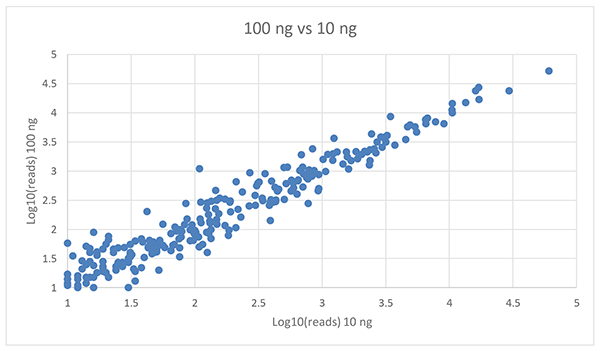 Including the NEXTFLEX® tRNA/YRNA blockers into your small RNA-sequencing workflow can help minimize YRNA and tRNA fragments from making their way into your library, which consequently increases miRNA reads. tRNA and YRNA fragments, though they may have unexplored roles as potential biomarkers, are abundant in sample types like biofluids. For researchers, however, who are primarily interested in other small RNA species like miRNAs, reads lost to these abundant tRNA and YRNA fragments in their sample will inevitably lead to a lower number of reads mapping to their RNA species of interest. Coupling the NEXTFLEX® tRNA/YRNA blockers with the NEXTFLEX® small RNA sequencing chemistry and data security of UDIs allows users to maximize the patented and patent-pending technology for ligase-associated bias reduction, which enables superior miRNA discovery for the same sequencing depth.

Consult with your PerkinElmer® Field Application Scientist or email

Selected Citations that Reference the Use of the NEXTFLEX Small RNA-Seq Kit V3:

Depletion of tRNA and YRNA from Plasma for Small RNA Sequencing

The NEXTFLEX® Small RNA-Seq Kit v3 is compatible with cell-free RNA, such as RNA isolated from plasma. Users who wish to deplete the abundant tRNA fragments and Y RNA fragments found in many types of cell-free RNA should use the NEXTFLEX® tRNA/YRNA Blocker (not included in kit). Please contact us at [email protected] if interested. Download instructions here.

Although NEXTFLEX Small RNA Sequencing Kits are normally used to prepare sequencing libraries representing miRNAs, siRNAs, or piRNAs, the kits can also be used to create libraries from other RNA samples, such as RNA isolated from ribosomal profiling, RIP-Seq (RNA binding protein immunoprecipitation and sequencing), CLIP-Seq (cross-linking immunoprecipitation and sequencing), and HITS-CLIP experiments. To create sequencing libraries with NEXTflex Small RNA Sequencing Kits, the RNA of interest should have a 5′ monophosphate and 3′ hydroxyl. Fortunately, these modifications can easily be added to most RNA molecules with T4 polynucleotide kinase (PNK). PNK contains both 5′ kinase and 3′ phosphatase activities, making it ideal for preparing RNA samples for library preparation with the NEXTFLEX Small RNA Seq Kit v3.

In order to prepare a library from RNA molecules that do not already contain a 5′ monophosphate and 3′ hydroxyl, the following basic strategy can be followed:

What is the lowest input of total RNA possible with this kit?

The lowest recommended input is 1 ng of total RNA. This amount of RNA should work well for most sample types. For samples that have high miRNA content, less total RNA may be used.

Why do I have to perform a cleanup after 3′ ligation? This step is not necessary in other kits.

Typical “tricks” to reduce formation of adapter-dimer do not work well when using adapters with randomized ends, which is the reason for the Excess 3′ Adapter Depletion step.

Is this kit compatible with both single read and paired-end sequencing?

Yes, in addition to single read sequencing this kit can also be used with paired-end sequencing.

Will the random nucleotides from the adapters be present in my sequencing reads?

Yes, the random bases will be present as the first four bases of the read and the four bases immediately before the 3′ adapter sequence.

How should the random bases be handled for alignment?

Following 3′ adapter trimming, the first and last four bases of the read should be trimmed prior to alignment. Another option is to use an aligner with a “local” mode.

What sequencing platforms is this kit compatible with?

This kit is compatible with all common Illumina® sequencing platforms including the HiSeq®, MiSeq®, and NextSeq® 500 systems.

How many sequencing cycles do small RNA libraries need?

This is dependent on your experiment and whether you’re looking at microRNAs or long non-coding RNAs. For microRNAs, we do not recommend fewer than 36 sequencing cycles. The Illumina® MiSeq® 1×50 cycle run is most commonly used for sequencing microRNAs. Most microRNAs are between 15–30 bases long, and sequencing beyond this point only sequences the adapter.

How many reads are needed per sample for small RNA sequencing?

This is also dependent on your experiment. Generally for expression profiling, 1–2M mapped reads is an accepted range. For discovery applications, you may want to increase to 2–5M reads.  Contact us at [email protected] and we can help you determine the best number of reads based on your experimental design.

How are the barcoded primers incorporated into the small RNA-Seq libraries?

The NEXTFLEX Small RNA Barcodes Primers, each containing a six-base index, are incorporated into the library during the PCR amplification step. This design allows for the indexes to be read using a second read, which reduces bias.

During size selection on 6% PAGE gel, which bands should I cut out of the gel?

What is AIR™ Ligase and why is it used in the NEXTFLEX Small RNA-Seq Kit v3?

AIR Ligase is an enhanced, truncated T4 RNA Ligase, which increases the efficiency with which small RNAs are tagged with adapter, giving greater sequence depth.

This kit recommends up to 25 cycles of PCR amplification for low-input libraries. Won’t this many PCR cycles intro bias?

No, PCR has been shown to introduce negligible bias into small RNA libraries. See publications by Jayaprakash, et al., Hafner, et al. and our whitepaper for more information.

What should I do if I observe precipitate in buffers?

What should I do if I observe precipitate in NEXTFLEX® Small RNA PCR Master Mix?

Decide which cookies you want to allow. You can change these settings at any time. However, this can result in some functions no longer being available. For information on deleting the cookies, please consult your browser’s help function. Learn more about the cookies we use.

With the slider, you can enable or disable different types of cookies:

Save & Close
Go to Top