Using the NEXTFLEX® ChIP-Seq Barcodes, the user can index 6, 12, 24, 48, or even 96 samples at once providing unparalleled Illumina® ChIP sequencing capacity. 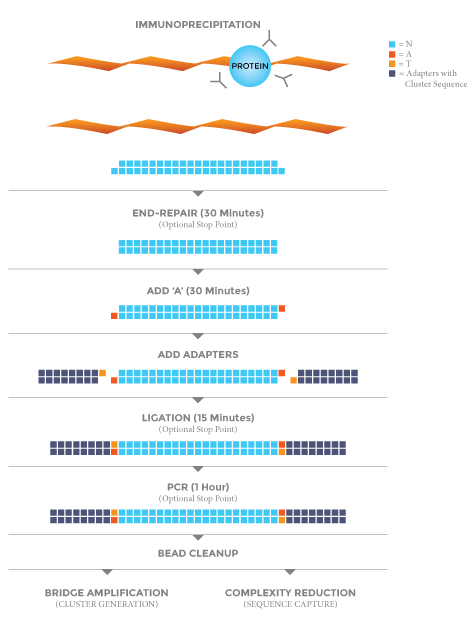 11 different PCR enzymes used in library preparation kits for next generation sequencing were tested in this sequencing experiment. The performance of the three best are highlighted here: NEXTflex PCR polymerase, Supplier D and Supplier I. This subset of enzymes produced the most consistent metrics, including library yield, GC bias and raw coverage, of the 11 PCR kits tested across two genomes. Quality control sequencing metrics against the AT-rich genome show more paired-end reads for the NEXTflex PCR polymerase, and more total alignments and non-duplicated fragments than Suppliers D and I (Table 1).

Our comparison between the NEXTflex PCR polymerase and those of Suppliers D and I found the NEXTflex PCR polymerase, which is used in all of the NEXTflex DNA library prep kits, including the NEXTflex ChIP-Seq Kit, and RNA-seq NGS library preparation kits, to be the most unbiased enzyme for NGS library prep across two highly diverse genomes, while consistently delivering even and high read coverage. Consistency of library yield between these two genomes demonstrates that this enzyme is extremely robust and can be applied to numerous NGS applications including, but not limited to, WGS, WES, metagenomics, target sequencing and other uses.

How should I prepare for my ChIP-seq experiment?

You may have heard the saying, ‘Garbage in, garbage out’.  This is especially pertinent to ChIP experiments.  Verification of each chromatin prep can be overlooked if repeating the same process over and over, but we can’t stress enough the importance of checking the quality of your chromatin shear on a gel or bioanalyzer after each prep. If the chromatin shear is not the desired size (i.e. too small or too large), the ability to detect peaks and pinpoint chromatin binding sites may be compromised.

The quality control (QC) of antibodies is also extremely important.  The ability of each antibody within your study to IP under ChIP conditions should be verified because ChIP buffers can differ substantially from other applications such as Western blotting or immunofluorescence.  Ideally, we recommend saving a fraction of each ChIP to verify the success of IP by Western blotting. Guidelines and examples for antibody validation were generated by the ENCODE and modENCODE consortia. Following these steps before sequencing will increase success of your downstream workflow.

What controls should I include and do I need replicates?

If you regularly perform ChIP followed by qPCR, you may be most familiar with using control immunoglobulins (IgG, IgA, IgM, etc.) as controls for IPs. Some also routinely use input, which is non-IPed chromatin from the same preparation, to calculate percent input. For ChIP-seq, a control IP is sometimes utilized, but is not extremely useful as any DNA associated with this sample would be background only. Whether or not a sample such as IgG is used, we highly recommend making libraries out of your input ChIP DNA as controls. Only one input is required per chromatin prep, so performing several ChIPs from the same chromatin will save sequencing reads and cost. Importantly, the starting material used to make your input library should be within a similar concentration range as your IP samples. The input sample will be used as a reference during peak calling.

Whether or not to include replicates depends on several factors including cost and whether the antibodies have been previously characterized by ChIP-seq.  If using new antibodies, the reproducibility of the IP should be assessed using independent biological replicates. Furthermore, if multiple antibodies are available, comparison of ChIP profiles of different antibodies can be helpful to confirm binding sites as well as generate a ‘meta’ binding profile, as peaks that can be detected across multiple antibodies are more statistically likely to be true peaks.

Which kit should I use to generate my libraries?

We has several kits to assist your production of ChIP-seq libraries. The NEXTflex™ ChIP-Seq Kit works best for low input samples.  We and others have successfully sequenced libraries using as little as 100 pg of starting material. If you are concerned about quantification of peaks and would like to eliminate or get a clear picture of PCR bias incurred during library construction, consider using the qChIP-seq method that incorporates molecular indices onto each end of your DNA fragments during the ligation step. Molecular indexing allows counting of unique ligation events to distinguish unique molecules from PCR duplicates. Finally, if constructing a library at high speed suits your needs, our NEXTflex™ Rapid DNA-Seq Kit allows for library construction in as little as 2 hours.

How many reads do I need and how many samples can I multiplex?

Many ChIP-seq experiments have multiple samples involved and more than enough reads are generated per lane or run, thus barcoding samples and pooling for sequencing is a great way to increase the productivity of one sequencing run.  Often researchers ask how to plan their multiplexing in order to minimize costs and obtain the best possible data quality. The answer depends on several factors including the size of the genome being sequenced, as well as the desired coverage. The classic Lander/Waterman equation (C = LN/G, where C is coverage, G is haploid genome length, L is read length, and N is the number of reads) may not be the only factor to consider in determining how many reads are required. ChIP-seq by nature will likely not produce even coverage, rather an ideal library which would contain areas of very dense read coverage (i.e. peaks) surrounded by background level to no reads. Ensuring that your antibodies efficiently IP will reduce signal to noise, and also reduce the number of reads you will need to detect peaks. Peak detection with various levels of reads has been examined thoroughly by the ENCODE and modENCODE consortia. Although peaks can be detected with as little as 20 million (M) uniquely mapped reads for the human genome and 2 M uniquely mapped reads with model organism genomes, increasing mapped reads up to 100 M for humans improved peak detection. We have carried out an estimate for number of reads required for several organisms below. These are general guidelines and can be modified based on specific requirements of your experiment.

What kind of data analysis is required?

Once you get your data and have mapped reads to your genome of interest, the next step is to determine where the chromatin binding sites are located. Depending on the type of protein that is being studied, specialized analysis may be required to determine size and number of peaks. For example, the MACS algorithm is great for finding sharp, well-defined peaks, such as transcription factor binding sites. However, if you are working on a protein that may have more broad peaks, such as RNA-binding proteins, or you are mapping H3K27me3, other algorithms such as SPP can be further tweaked to best define larger types of peaks or islands of signal. A more detailed list of peak calling can be found here and keep in mind that new and interesting tools are continuously being developed. We always recommend visually inspecting your data in the genome browser to make sure your peak callers are doing what you expect.

The NEXTFLEX® ChIP-Seq Library Prep Kit contains enough material to prepare 8 or 48 ChIP or genomic DNA samples for Illumina® sequencing. The shelf life of all reagents is 12 months when stored properly. This kit is shipped on dry ice.