Multiplexing up to 96 RNA Libraries for Illumina® Sequencing

This kit was designed to be used in conjunction with the NEXTFLEX® RNA-Seq Barcodes or NEXTFLEX-96™ RNA-Seq Barcodes for multiplexing. The availability of up to 96 unique adapter barcodes makes this the most high-throughput kit available for RNA library prep.

RNA Sequencing (RNA-Seq) is a valuable tool for a broad range of clinical, environmental, and basic research.  Producing high quality RNA-Seq libraries can be challenging for several reasons, including isolation of pure RNA, efficiently converting RNA to cDNA, and loss of material incurred during the series of enzymatic steps and cleanups required for library construction. Here we introduce PerkinElmer’s family of NEXTFLEX® Rapid RNA-Seq kits for Illumina® sequencing, all of which include the thermostable NEXTFLEX® Rapid Reverse Transcriptase enzyme.  The NEXTFLEX® Rapid RNA-Seq Kits provide affordable and unique technology, some of the shortest RNA-Seq library preparation times of any kits on the market, include all enzymes required for library preparation, and produce the highest quality RNA-Seq library.

The NEXTFLEX® Rapid RNA-Seq Kits allow the end user to complete library construction in less than 1 day.  In contrast, the previous generation of NEXTFLEX® RNA-Seq Kits, as well as the current Illumina® TruSeq® RNA-Seq Kits, require over 7 hours for completion (Table 1). By combining second strand synthesis and end repair into the same reaction, the need for a separate end repair step and cleanup is eliminated. This improvement is time efficient and reduces loss of material during cleanup.

Table 1. Comparison of RNA-Seq library preparation kit protocols and time to completion. Note that times include bead cleanups and account for time required from RNA fragmentation to the final bead cleanup after PCR.

A critical step in RNA-Seq library construction is the conversion of RNA to cDNA. All NEXTFLEX® Rapid RNA-Seq Kits include NEXTFLEX® Rapid Reverse Transcriptase (RT) enzyme, in contrast to our previous RNA-Seq kits as well as to the Illumina® TruSeq® kit (Table 1). The NEXTFLEX® Rapid RT is a thermostable, RNaseH minus enzyme that functions optimally at 50˚ C, a higher temperature than standard Moloney-Murine Leukemia Virus (M-MLV) reverse transcriptases, which function at 42˚ C.  This elevated temperature allows for reduced secondary structure in RNA templates and therefore increased efficiency of first strand synthesis. 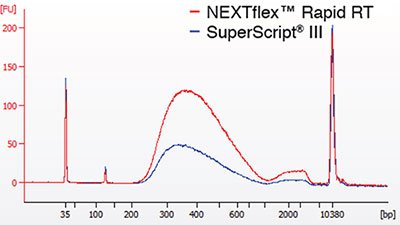 Further analysis of NEXTFLEX® Rapid RNA-Seq library quality was carried out using Illumina® sequencing, as library yield is only one metric of library quality. Libraries were prepared with the NEXTFLEX® Rapid RNA-Seq Kit using 10 ng aliquots of a single murine Ag8 cell Poly (A)+ RNA sample, so as to disentangle biological variation from technical variation. Libraries were sequenced on an Illumina® HiSeq® 2500 instrument using a 67 bp single end RAPID run.  Resulting reads were trimmed based on a quality score moving window using sickle and mapped to the UCSC mm10 assembly using TopHat 2.0.10. We obtained a total of 31,949,336 reads for Rapid RT libraries and 31,720,922 for Superscript III libraries (Table 2). For transcript representation purposes, only reads mapping to exons, specifically all annotated 5’ UTRs, coding sequences, and 3’ UTRs, were further considered. The number of total reads as well as unique reads mapping to exons were similar between the two enzymes; however, a greater number of transcripts, 12,418 vs. 12,129, were represented in the NEXTflex Rapid RT libraries vs. SuperScript III libraries, respectively.

A further analysis of mapped reads was performed. Read quality before and after mapping was visualized using FastQC and GC content as a function of reads examined (Figure 2). Read quality is excellent in the total library and is slightly higher in the remaining set of trimmed, mapped reads, which is expected given a quality-aware trimming step was carried out. Furthermore, GC content is very similar to the theoretical distribution, indicating accuracy in transcript representation. Visual inspection of several genes demonstrates read coverage across all exons (Figure 3A and B). Furthermore, a metagene analysis of read coverage across all genes divided into 100 bin segments, demonstrates even read coverage across the 5’-, gene body, and 3’-ends of transcripts (Figure 3C). 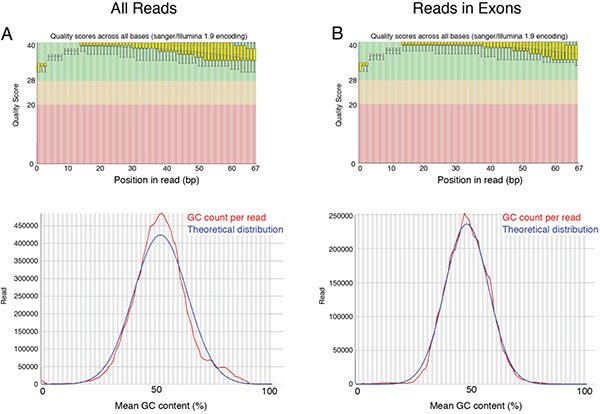 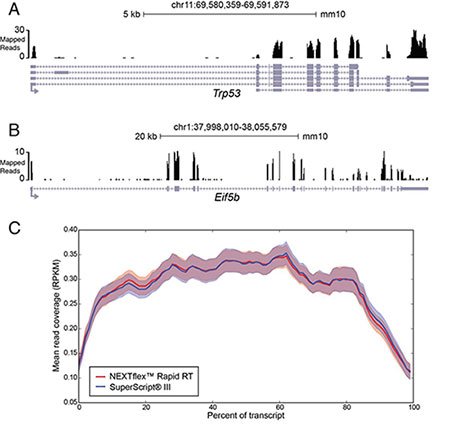 Figure 3. Read coverage across gene bodies.  Mapped reads at the (A) Trp53 and (B) Eif5b loci scaled to read density as indicated. (C) Metagene plot of read density across all annotated loci. All gene bodies and mapped read densities are scaled to 100 bin segments; mean read density is shown in reads per kilobase per million mapped reads (RPKM; solid line) +/- standard error across replicates (faded bands). Shown is read signal corresponding to libraries made with either NEXTFLEX® Rapid RT (red) or SuperScript III (blue). 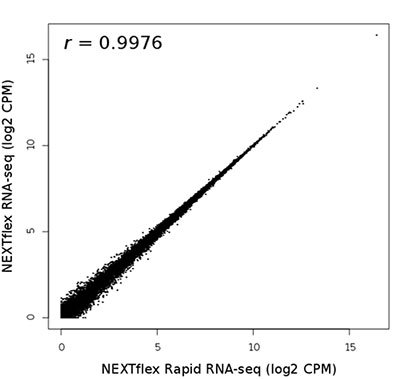 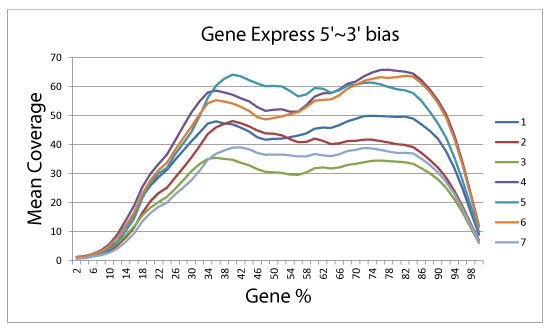 Normalized coverage by position. For each library, the average coverage is shown at each relative position along the transcripts’ length.

Selected Publications that Cite the Use of the NEXTFLEX Rapid RNA-Seq Kit:

The NEXTFLEX® Rapid RNA-Seq Illumina® library prep kit contains enough material to prepare 8 or 48 RNA samples for RNA seuencing on an Illumina® platform. The shelf life of all reagents is 12 months when stored properly. All components can safely be stored at -20°C.