Whole genome amplification (WGA) is used to obtain sufficient quantities of DNA from limited template samples and has become an essential first step for testing single cells. Following WGA, the detection of genetic changes from these samples, including copy number variants (CNV) and mutation analysis is achieved using downstream genomic applications such as massively parallel sequencing (MPS), genotyping and array-based technologies. WGA methods must be critically assessed for their suitability to their intended use, as some methodologies can introduce inaccuracies through amplification bias, errors, and inconsistent yields.

The principle of DOP-PCR is based on the use of a novel primer design; the DOP primer consists of three distinct regions. The 3’ end of the primer also contains a specific short sequence (6 bp in the original 6MW DOP primer) that anneals at an estimated 106 evenly dispersed sites across the human genome. The primer contains a series of degenerate bases (6 bp in the 6MW primer that are randomly made up of As, Cs, Gs or Ts) followed by another region of specified sequence (10 bp in 6 MW).

The PCR program starts with a series of low stringency cycles (using a low annealing temperature such as 25°C) and a slow ramp rate to reach the PCR extension temperature of 72°C) so that the initial PCR amplification is solely reliant on the annealing of the first 6 primer bases to the DNA template.  This is followed by a series of high stringency PCR cycles (using a higher annealing temperature of 58°C) and standard ramping rate to the extension temperature, like a typical PCR program. The purpose of the degenerate bases and the specific 5’ sequence is to stabilize the PCR amplification during the high stringency cycles, when the entire primer sequence is used for annealing.  The degenerate bases in the middle of the DOP-PCR primer turn what would have been a single primer sequence into a pool of 46 different primers.

The expertise in PerkinElmer’s DOPlify® kit originated from our use of the original Telenius DOP-PCR to amplify whole microdissected chromosomes that were then printed onto a microarray surface and used as targets for the detection of whole chromosome aneuploidy.  Our scientists published the first paper demonstrating the detection of whole chromosome aneuploidy from single cells using this microarray2. 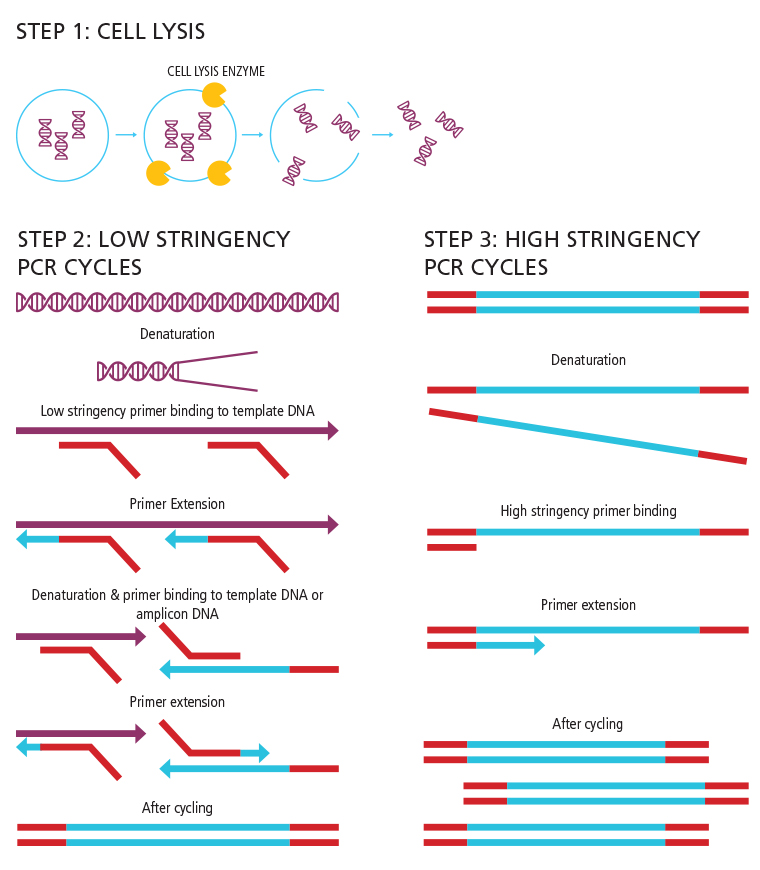 The DOPlify® WGA kit reproducibly amplifies total DNA from limited template samples to produce microgram quantities of amplified DNA in less than 3 hours. The kit can be used successfully on both cellular and purified genomic DNA inputs for a range of different applications including but not limited to massively parallel sequencing (MPS), genotyping and array-based technologies.