Single-cell RNA sequencing (scRNAseq) of minimally invasive liquid biopsies, such as blood, bone marrow, urine, and CSF enables researchers to gain valuable biological insights into tissue-resident diseases1,2. Sites where these samples are collected often do not have the specialized equipment or trained personnel required by many scRNAseq technologies. Freezing and shipping single-cell samples to a centralized lab setting for processing into sequencing libraries allows for greater flexibility with multi-site and time course collections. Cryopreservation, a common storage method, can be irreproducible and cause poor cell viability and cell stress due to ice crystal formation during freezing, leading to poor data quality3,4. The HIVE™ scRNAseq Solution integrates sample storage and single-cell profiling into a single workflow. After cells are gently loaded into the HIVE collector, the Cell Preservation Solution locks the molecular profile at the time and site of collection. The quantity, quality, and biological complexity of cells stored in the HIVE device are comparable to freshly processed cells, so these important samples can be stored or shipped without compromise. 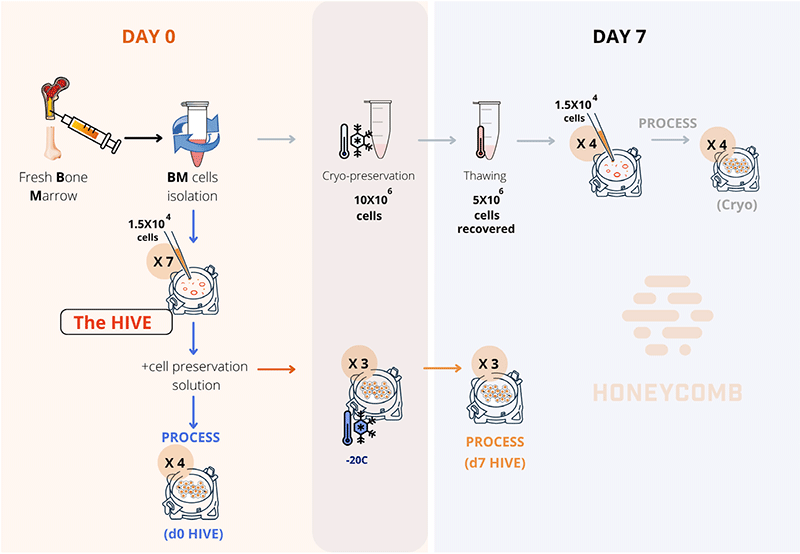 Cryopreservation resulted in significant cell loss during thawing; 10,000,000 cells were cryopreserved but only 5,150,000 cells were recovered, a loss of 48.5%. Furthermore, even though HIVE collectors were loaded with equal numbers of cells per condition, fewer cryopreserved cells were recovered with the HIVE device, likely due to cell damage from cryopreservation [Figure 3A]. Other performance metrics, such as genes per cell and transcripts per cell, were similar between processing time points [Figures 3B, 3C]. Additionally, the cryopreserved cells recovered showed a higher percentage of mitochondrial reads, indicative of low-quality cells [Figure 3D].

Bone marrow, the spongy tissue at the center of most bones, is the primary site of hematopoiesis, the production of new blood cells. Hematopoietic stem cells give rise to progenitor cells which then differentiate into platelets (thrombocytes), red blood cells (erythrocytes), and white blood cells (leukocytes). After thresholding and filtering for high quality single-cells, a UMAP plot of single cells from all eleven HIVE devices was generated and colored by cell type [Figure 4A]. Twenty-three cell types were identified, including T cell, B cell, multiple stages of erythrocyte progenitors and fragile cell types, like neutrophils and eosinophils. Additionally, there was robust and specific expression of marker genes for each cell type [Figure 4B]. 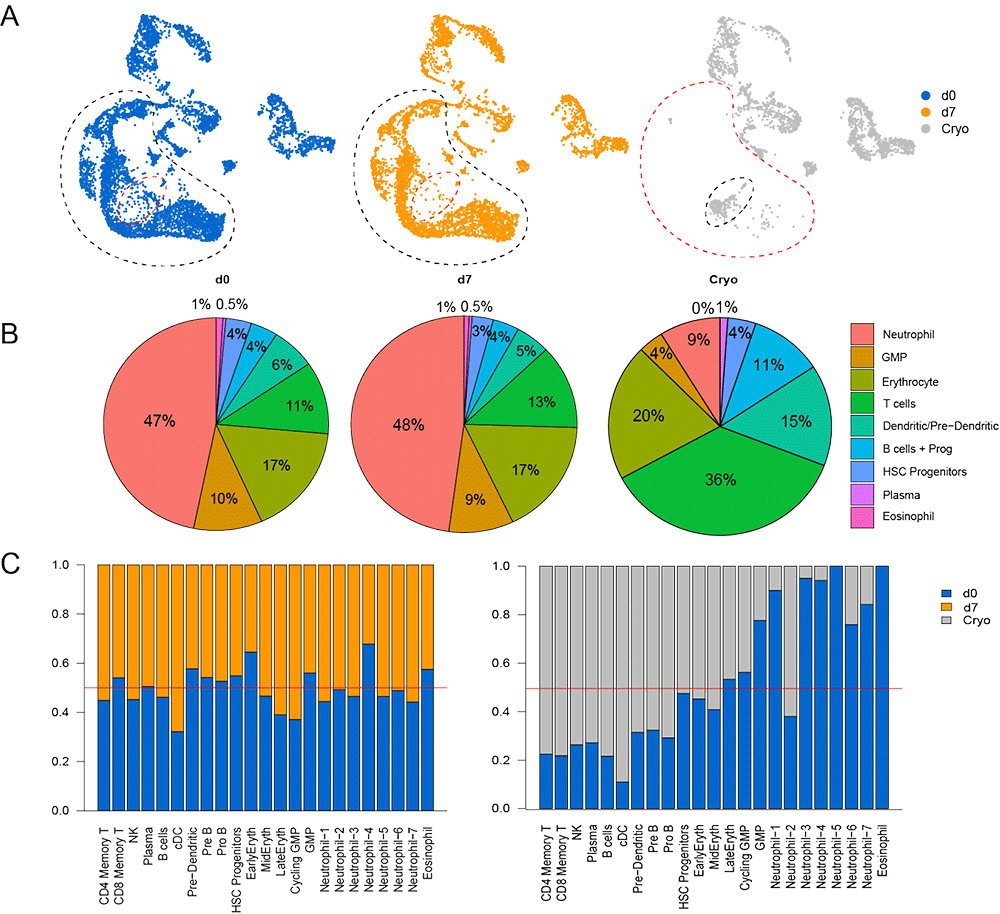 Overall, these results show that samples captured with the HIVE scRNAseq device maintain the quality and biological complexity of samples processed immediately, while cryopreservation results in loss of biologically important cell types due to incomplete cell recovery. The cell types destroyed by cryopreservation of bone marrow are critical to research in many areas, including leukemia, multiple myeloma, myelodysplastic syndromes, and rheumatoid arthritis. Single cell analysis of minimally invasive liquid biopsies can provide new knowledge within basic, translational, and clinical research. The single cell storage integrated into the HIVE scRNAseq Solution provides access to samples that have previously been challenging to collect without sacrificing biological information.