The field of genetics continues to grow at an unforeseen pace. Sequencing instrument manufacturers are rising to the challenge by offering larger and larger sequencing platforms capable of sequencing the entire human genome in just a few days with the promise of achieving the $1,000 genome. The growth of this market doesn’t look like slowing down any time soon.

As genetic testing becomes more and more embedded into assisted reproduction with applications including preimplantation genetic testing for aneuploidy (PGT-A), structural chromosome rearrangements (PGT-SR), and monogenic diseases (PGT-M) of embryos and carrier screening of prospective parents, and with the potential for continued development of other tests to expand the scope of Reproductive Genetics, there is a growing need for high-throughput, reliable technologies to keep up with demand.

While the use of automation for sample preparation is fairly commonplace in large hospital lab settings, it is relatively new to smaller genetics labs.  Interestingly, IVF centers are not novices when it comes to automation, with most centers using high-end blood analysis systems that offer fully automated analysis of multiple hormones from one blood tube sample.  Several reproductive genetics labs have begun working with automation for sample preparation to allow for higher throughput testing of patient samples with less hands-on time needed from highly trained lab staff, allowing for more time to be spent of important tasks in the lab rather than on mundane pipetting and witnessing tasks.  This is exactly where a liquid handling robot fits in.  The liquid handler is pre-programmed to perform the simple pipetting tasks in a fully controlled system with no chance of sample mix-up due to human error.  Add in the use of pre-plated library preparation reagents that are simply placed into the instrument alongside, for example, PGT-A samples laid out in a specific pattern in 96 well plates.  This system offers ‘walk-away’ sample preparation to the lab staff allowing them to concentrate on more important and interesting tasks.

Automated liquid handling can reduce common errors that occur during manual library preparation including adding the same adapter to multiple samples, under-pipetting one or more wells in the plate, and missing adapters among others (see our blog post, Ten Things That Can (and Do) Go Wrong with Manual Library Prep). Obviously, automation probably isn’t ‘right’ for every lab, however, liquid handling robots come in all shapes and sizes to fit the throughput of a variety of labs and their applications.  So, if a lab is processing upwards of 48-96 samples per week, automation may make sense.  The beauty of adding liquid handling to your lab is that there will be times when the liquid handler is not ‘working’ on the original task, therefore it can be tasked with other routine lab duties as well, making automation much more valuable to the lab.

One lab using automated liquid handling in routine PGT-A cases has shown very high reproducibility among and between runs, even when they moved from 48 samples/run to 96 samples/run.  Here they measured the average read count per run and optimal cluster density on the sequencer and found them both to be superior on the liquid handler as compared to performing library preparation by hand*. 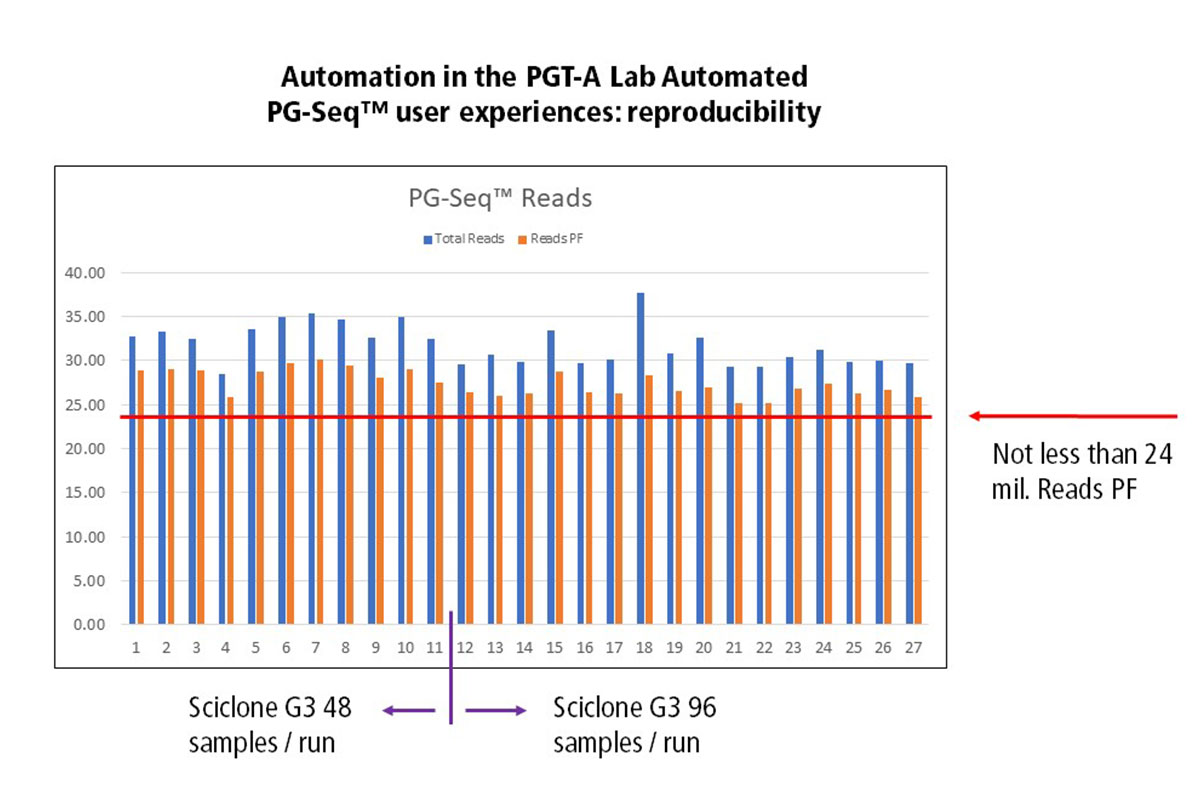 Decide which cookies you want to allow. You can change these settings at any time. However, this can result in some functions no longer being available. For information on deleting the cookies, please consult your browser’s help function. Learn more about the cookies we use.

With the slider, you can enable or disable different types of cookies:

Save & Close
Go to Top